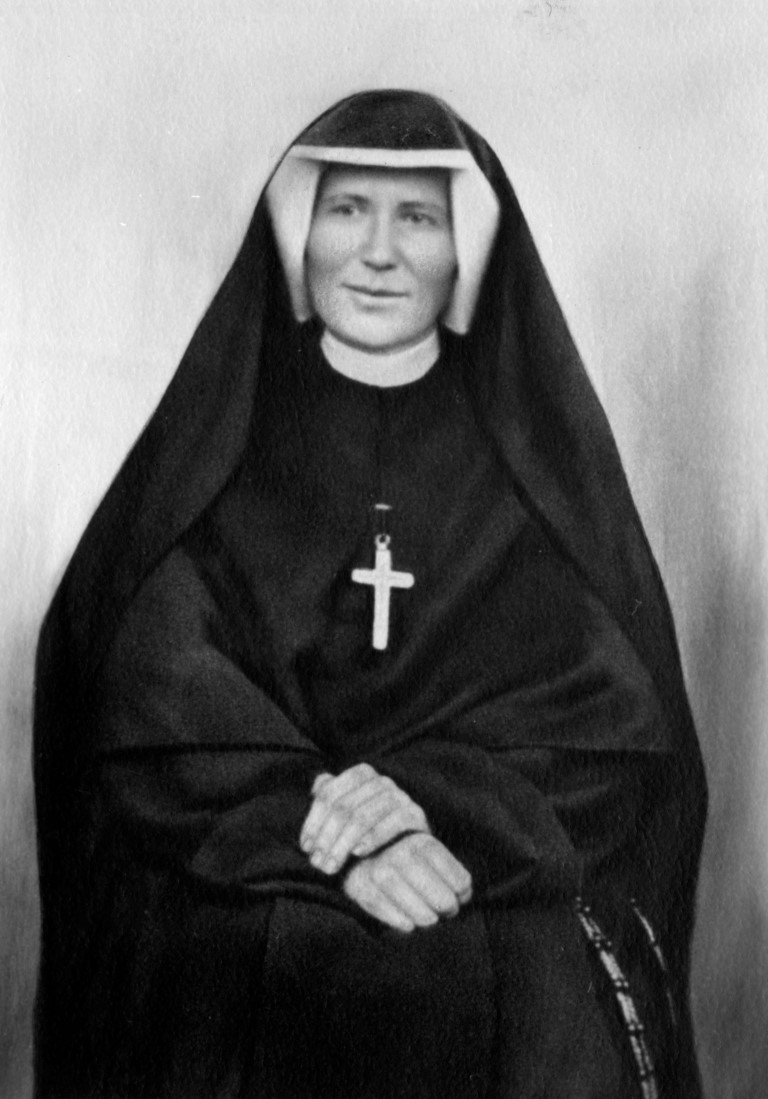 Helena Kowalska - Sister Maria Faustina - was born in the village of Głogowiec (100 km from Plock) on August 25, 1905. She was the third of ten children of Stanisław and Marianna Kowalska. Helena’s family lived meagerly - sustained by her father's carpentry and farm work. However, the home was filled with great love and an atmosphere of deep faith. Helena attended formal school for less than three years. At the age of 16 she asked parents for permission to enter a convent. The parents firmly refused. When two years later, repeating her request, she again met with a refusal, and therefore decided to suppress the voice calling her to the religious life - wanting to be obedient to her parents. She went to Lodz to work, educating children, for some wealthy families. At 20 years old, she went to with her sister to a nearby park Wenecja - J. Słowackiego today, to a dance. She remembers this event:

Once I was at a dance [probably in Lodz] with one of my sisters. While everybody was having a good time, my soul was experiencing deep torments. As I began to dance, I suddenly saw Jesus at my side, Jesus racked with pain, stripped of His clothing, all covered with wounds, who spoke these words to me: How long shall I put up with you and how long will you keep putting Me off? At that moment the charming music stopped, [and] the company I was with vanished from my sight; there remained Jesus and I. I took a seat by my dear sister pretending to have a headache in order to cover up what took place in my soul. After a while I slipped out unnoticed, leaving my sister and all my companions behind and made my way to the Cathedral of Saint Stanislaus Kostka.

It was almost twilight; there were only a few people in the cathedral. Paying no attention to what was happening around me, I fell prostrate before the Blessed Sacrament and begged the Lord to be good enough to give me to understand what I should do next. (Diary 9) Then I heard these words: Go at once to Warsaw; you will enter a convent there. I rose from prayer, came home, and took care of things that needed to be settled. As best I could, I confided to my sister what took place within my soul. I told her to say good-bye to our parents, and thus, in my one dress, with no other belonging, I arrived in Warsaw (Diary 10).

In July, 1924, after her vision, Helena left for Warsaw immediately to join a convent. She approached several convents but was turned down every time. After several weeks of searching, she knocked at the convent of the Sisters of Our Lady of Mercy at the present-day location on Żytnia Street. Here, after a conversation with the Mother Superior Michaela Moraczewska (later the Superior General), she was admitted and conditionally accepted on August 1, 1925, after working one year as a housekeeper to gain a modest dowry. In accordance with the provision, she was adopted by the community. Her short life of 13 years was lived in many homes - the longest in Cracow, Warsaw, Plock and Vilnius. She was a cook, a saleswoman selling bread in the convent shop, a gardener and a portress. Faustina She suffered from tuberculosis of the lungs and alimentary system, and after more than eight months of treatment in a hospital in Krakow-Prądnik, she died on Oct. 5, 1938 in Cracow-Lagiewniki.

At the Convent in Płock, Sister Faustina Kowalska resided from June 1930 to November 1932. She worked there in the kitchen and in the bakery shop (sometimes helping in the bakery). She lived in a one-story annex, which after World War II was torn down.

After the death of Sister M. Faustina:

October 21, 1965 - the Metropolitan Curia in Krakow, directed by Bishop Julian Groblickiego, delegated by the Cardinal Karol Wojtyla, began to gather information on the life and virtues of the Servant of God, Sister Faustina Kowalska, initiating the process of beatification.

November 25, 1966 - Transfer of mortal remains of Sister Faustina Kowalska from the cemetery to the convent chapel in Cracow.

September 20, 1967 - Cardinal Karol Wojtyla concludes the process of information gathering on the life and virtues of the Servant of God Sister Faustina Kowalska at the diocesan level. The case file was handed over to the Congregation for the Causes of Saints in Rome.

1981 - The first edition of the Diary of Sister Faustina Kowalska.

April 30, 2000 - Canonization of Sister Faustina by the Holy Father, Pope John Paul II in St. Peter's Square in Rome and connecting with the Sanctuary in Krakow-Lagiewniki through live transmission viewed on a large screen. Establishment of the Feast of Divine Mercy for the whole Church.